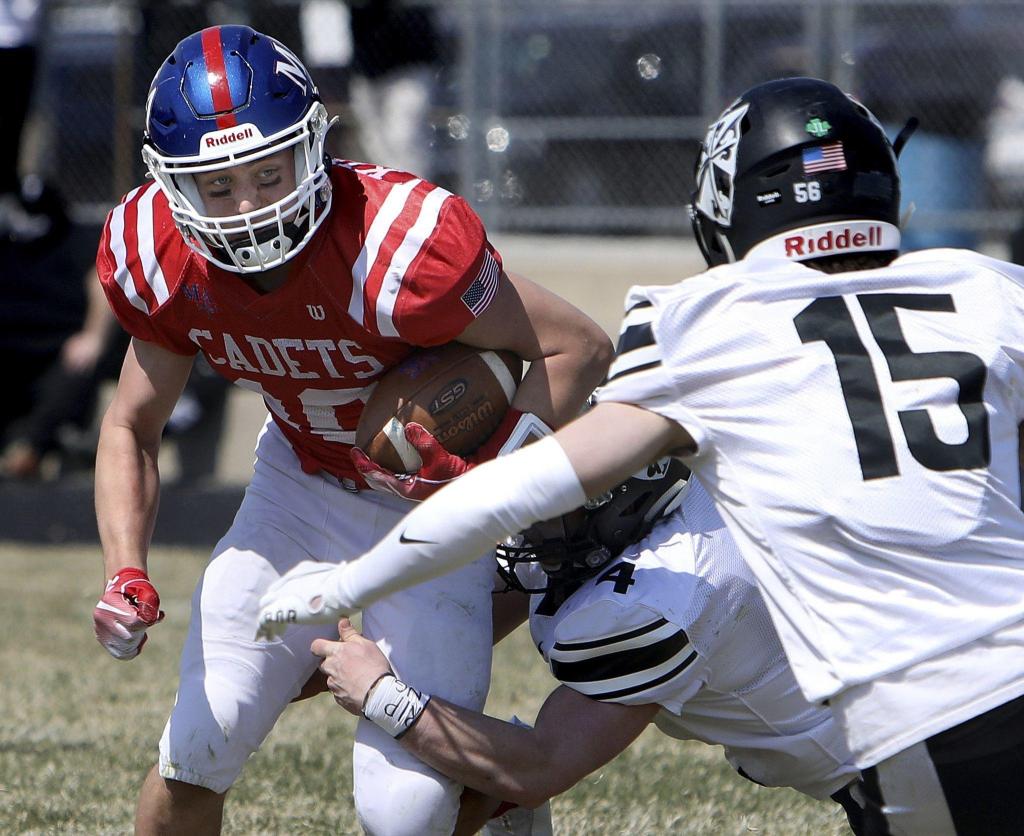 In a way, it’s good to see Marmion senior Anthony Kuceba relaxing and enjoying himself.

As he described it to me, it’s his way of “taking my foot off the gas”.

Kuceba put together a whole resume at Marmion. It includes impressive academic, athletic, and extracurricular achievements as well as outstanding charitable work and service to his school and community.

That’s why the Chicago Bears recently named Kuceba their fourth of nine Community High School All-Star Award winners. Players are honored from March to May for making a positive impact on their community.

The NFL team, in conjunction with Athletico Physical Therapy, also donated $500 to the player’s chosen charity. For Kuceba, it was Region C of Special Olympics Illinois.

It’s no surprise to those who know him well that, even looking back, Kuceba remains a young man on the move.

In his senior season in high school, Kuceba took up a new sport: lacrosse.

In previous springs, he competed in volleyball and athletics, while focusing primarily on football.

“It’s a lot of fun,” Kuceba said of lacrosse. “Really, it’s because a lot of my friends do it. This allows me to take my foot off the accelerator.

“By that I mean I don’t have to be the best and push like I do in football. It’s like soccer with a stick or field or field hockey.

It’s probably not a bad football training alternative either.

Kuceba played defensive back in college for three seasons and added wide receiver and running back duties in his final two seasons for the cadets, earning all-conference honors those two years.

It will also go to the next level.

Kuceba committed to NCAA Washington Division III in St. Louis, which is a member of the CCIW. Many of his road games will be closer to his Aurora home for his parents, Tom and Jennifer, and younger sister, Mia, than his home games.

Kuceba immediately came to mind earlier this school year when Thorpe received an email from the Bears seeking nominations for the High School Coaching Award.

An Illinois State scholar, Kuceba is the vice president of student council and cheer club leader for Marmion, who will graduate in the top 10 percent of her class with a 4.55 GPA. He is also involved in the school’s JROTC, outreach ministry, youth soccer camps, and Special Olympics.

“I’ve done some kind of community service since middle school, and my mom was probably the biggest influence on that,” Kuceba said. “That and my experience at Marmion, which has helped me realize and appreciate the opportunities they offer us.

“I love working with Special Olympics, interacting with these athletes and seeing what they get out of it working with events like track and field, powerlifting and golf. It’s easily my favorite thing to do.

Kuceba plans to participate in Washington’s ROTC program, which requires a 4-5 year military commitment after graduation. He still doesn’t know if he will pursue a degree in law or business.

The jury is still out among the coaching staff on whether he will play defense or offense for Washington, which just wrapped up a 7-4 season that included a 7-2 finish in the CCIW behind North Central College and Wheaton.

“I just want to play,” Kuceba said. “I would prefer anything that gets me out on the pitch as fast as possible.”

Thorpe thinks the Washington staff can’t go wrong with Kuceba, who was captain of the cadets.

“Anthony is just a great team player,” Thorpe said. “He blocks his butt and he catches the ball every time it’s thrown at him.

“His positivity and work ethic are impressive. It might rain, but Anthony will be the guy who says, “We need rain. » »