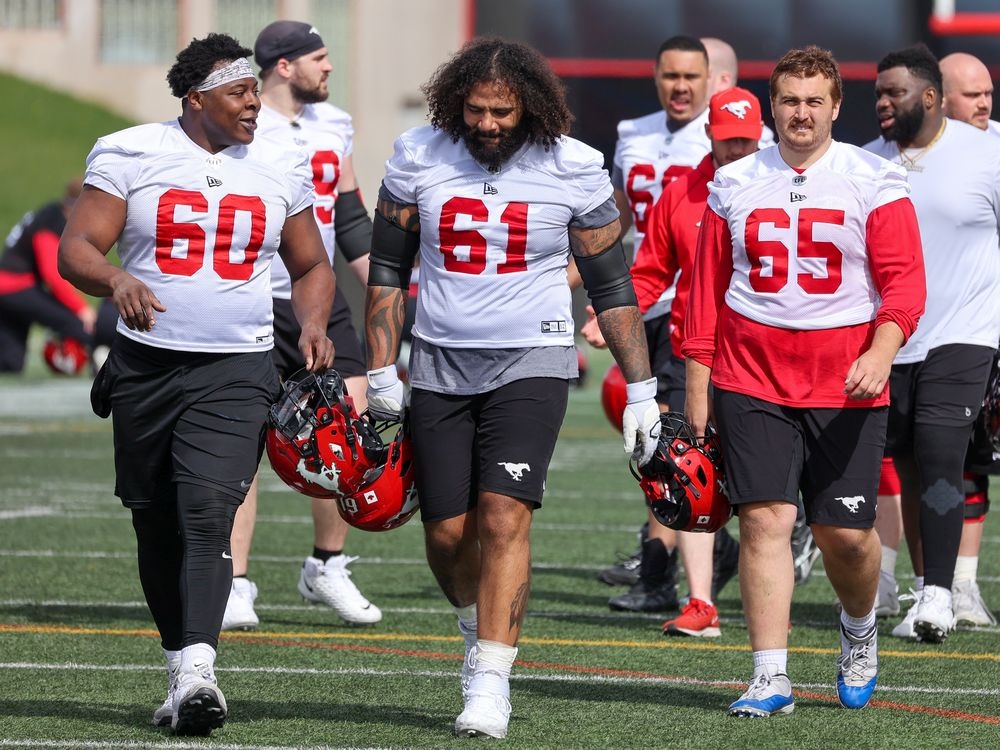 There was no need to sugarcoat the opening of the Calgary Stampeders’ main camp on Sunday.

The excitement was evident.

“Damn, that felt good,” Stampeders QB Bo Levi Mitchell gleefully said. “It was so good man. The dressing room is great because the guys are just excited to come back and play football. I know we have some stuff on the outside, but right now we’re going between the lines white.

For the next few days, in fact, let’s go for the Stamps at McMahon Stadium.

But Wednesday looms as a deadline for CFL teams in Alberta in the league’s latest labor dispute with the players’ union.

The CFL and the CFL Players’ Association broke off talks on a new collective bargaining agreement on Saturday, forcing three teams – the Montreal Alouettes, Hamilton Tiger-Cats and Toronto Argonauts – to cancel practices on Sunday , while Edmonton Stampeders and Elks players reported , under provincial rules.

“For us, because of Alberta labor laws, we’re practicing, so it’s a normal day for us,” Stamps interim player rep and defensive lineman Derek Wiggan said. “We will go through the process and then on Wednesday we will see what happens.

” I have good hope. I’m really hopeful. We trust our negotiating team. I know they’re going to give us something good, so it’s just a matter of doing it by Wednesday.

In the meantime, the Stamps seem happy to be there.

“We obviously talk about it,” Mitchell said. “Guys probably have different opinions on what is possibly holding up negotiations and things like that.

“Obviously we want a deal done because we want to be here playing football in June. As soon as that happens that would be great. It would be great to know that all the other teams are training as well. Right now, our mindset is at a minimum right now. We have three days of training, so we’re going to go out there and focus on that.

For his part, Stamps head coach Dave Dickenson has opted to avoid talk of work instead choosing to focus on the buzz of what is a return to normal after two consecutive tainted CFL seasons. of COVID restrictions – 2020’s canceled completely, and last year’s arriving late and shortened.

“I don’t see any clouds, so I’m comfortable,” Dickenson said, speaking colorfully of the impending deadline. “The energy is good. The positivity is there. The players are engaged. The coaches are excited to see what we have in place, if we can get that communication to the players and take care of the details.

“Also, decisions are made in three days as to who makes the team and who doesn’t. So we control what we can control.

Also, the head coach would rather talk about a live-action return to McMahon, especially in May.

“Especially coming back now,” Mitchell said. “Last year, we didn’t start before what, mid-June something…July? It was crazy. It was hot. Right now we had snow the first day the rookies landed (last Tuesday). I was like, I know these guys get off the plane like, ‘What’s going on here?’

“It definitely feels more like a normal season. We know we have an 18-game season ahead of us. The real season, returning fans, no restrictions… things like that. I think we’re just excited to come back and remind everyone how much fun the CFL season is. You don’t always question yourself, well… yeah, we have 14 games (like last year). The biggest thing with COVID last year was always walking in the locker room and not knowing if anyone had tested positive and now we have to wait to find out who their close contacts were and things like that. Now we just have to come here and play football. It’s going to be awesome.

This will, of course, be if there is no labor disruption.

“Unfortunately we’re getting a bit closer,” Wiggan said. “Just being in a meeting with the guys, all in the same room, so it’s a small step towards normality. Then just being outside training here, another step, but we have work in progress and we we just have to trust the process – let it happen. We can’t really control that. We just have to know – when to get the information, make informed choices and go from there.

In total, there are 101 players lined up by the Stamps for the main camp, but a handful have yet to arrive… First-round draft pick Jalen Philpot, a receiver who just finished a dynamic career with the Dinos of University of Calgary, stays away with tightness after limited activity during rookie camp. “He won’t be leaving for a while,” Dickenson said of Philpot. “It’s going to be at least another week. He has muscle traction. I want him to lock down his missions and all that. But if you stand on a muscle pull, it gets a little tight. Hope he does the right things. He had three or four games in rookie camp – and a few of them were really nice – so he flashed early but maybe not as often as we would have liked. … Also sidelined and on the injured vet list for the Stamps are RB Charlie Power (Achilles) and DL Connor McGough (myocarditis) … The team’s most recent signings came on Saturday, when DL TJ Rayam and OL Baer Hunter have been added to the list. The Stampeders selected Canadian Rayam, who played 49 games with the NCAA’s Boston College Eagles, in the May 5 supplemental draft. The son of Thomas Rayam, the former Stampeders offensive lineman and member of the Gray Rayam Cup championship team joins the Red and Whites after attending a mini-camp with the Kansas City Chiefs of the National Football League. American Hunter recently attended rookie camp with the NFL’s New York Giants. In college, he played 64 games over five seasons with the NCAA’s Appalachian State Mountaineers, earning Sun Belt Conference accolades three times, including second-team honors in 2019 and first-team recognition. team in 2020 and 2021.

Sign up to receive daily news from Calgary SUN, a division of Postmedia Network Inc.

Thank you for your registration!

A welcome email is on its way. If you don’t see it, please check your spam folder.

The next issue of Calgary Sun Headline News will soon be in your inbox.

We encountered a problem during your registration. Try Again