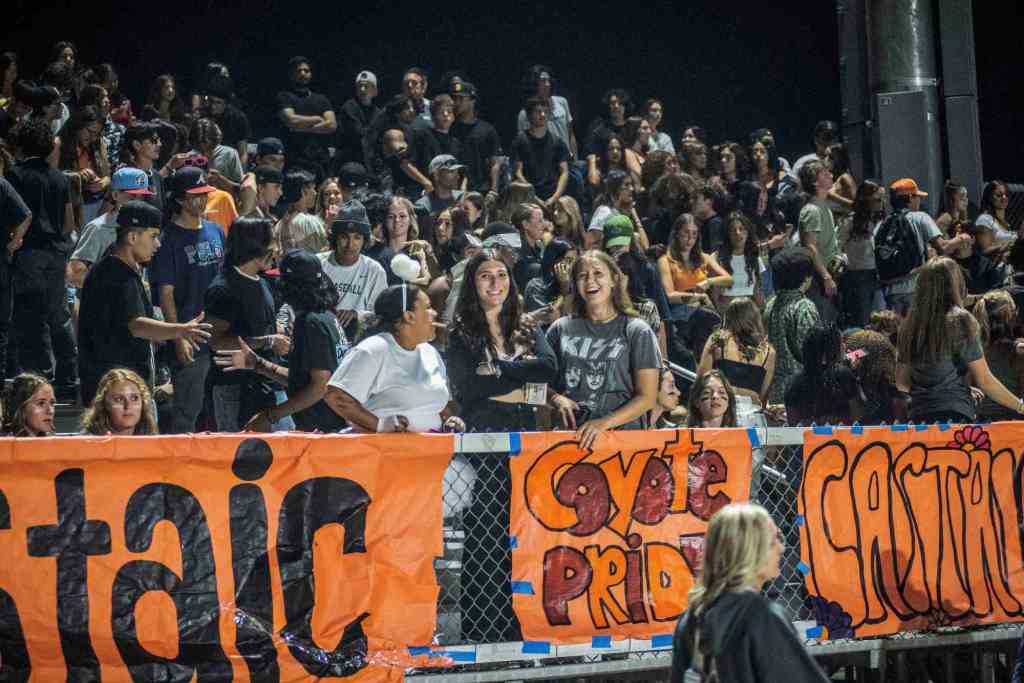 I don’t expect Castaic High to be in the top 10 of the Daily News football rankings anytime soon, but if I were to rank the coolest managers in the area, Vince Ferry might be No. 1.

Moments before Castaic’s historic kickoff, school principal Ferry was on the field alongside quarterback Dominic Espinoza, catching incoming passes and returning the ball to Espinoza as he was heating up. This is the first time I’ve seen an administrator help the starting quarterback untie before a game.

It would be like your high school principal bouncing for shooters before a basketball game, or even joining the layup lines. It was a sight to behold as Ferry caught throws zipping in his khaki pants and collared shirt, which isn’t too surprising considering he was a tight end and team captain at the University of Oregon in 1992.

Castaic, a school that opened in the fall of 2019, played its first-ever college football game on Thursday night as it hosted Adelanto. The Coyotes, led by head coach Tony Uebelhardt, had bottom-tier football for three seasons before finally implementing a full college schedule in 2022.

“It’s a historic night,” said Ferry, a first-grade principal at the school. “What athletics, especially football, brings to a campus is immeasurable.”

The Coyote Crush, which is the official name of the student section, was standing. The band was playing. The parents applauded. The PA announcer yelled every time the team got a first down. The energy was evident. But getting to this point has not been easy.

“Our first summer, we had 12 kids come out,” Uebelhardt said. “We started our first [freshman] game with 16 and finished the season with 24 players. Our second year, the pandemic hit.

Uebelhardt, who has been coaching high school football for 18 years, said the impact of COVID-19 was felt for two years while trying to build a program from scratch. Despite the setback, the Coyotes came through as expected.

“This year will be the school’s first senior class, so it’s quite an accomplishment to provide a varsity season for the guys who have been here from the start,” Uebelhardt said.

The program now has 75 players with a junior varsity team.

Ferry and Uebelhardt both shared what looked like a more tight-knit community in Castaic, a town at the northernmost point of the Santa Clarita Valley.

“The community support has been great, we’re kind of alone up there in Castaic,” Uebelhardt said with a laugh. “But I think it creates more passion for the program.”

Vince Ferry from Castaic High has my vote for coolest principal. On the court, helping his QB warm-up – gotta love that. It’s a historic night in the Santa Clarita Valley as the Coyotes kick off their first-ever season of college football. The school opened its doors in 2019. Chronicle to come on Sunday… pic.twitter.com/KnFA0HFH3P

Ferry was the principal of Saugus High during the November 2019 school campus shooting. Three students died, including the attacker. Ferry has a reputation as a gregarious and energetic principal who promotes the student experience. His brother Frank Ferry was manager at Alemany when things were rolling athletically there.

Vince thinks athletics and extracurricular activities are important for building pride and community. That’s why he was instrumental in the Saugus community’s healing process after the shooting.

For months, Saugus didn’t host any sporting events, but Ferry encouraged a return to school spirit through athletics. It finally happened on January 24, 2020, during a men’s basketball game. Over a thousand students and fans filled the gymnasium.

“The whole city came together to support him,” Ferry said that night in January 2020. “The recovery is still underway, but the progress is remarkable. I think nights like this where the kids come together and the support gives them normalcy.

Castaic has state-of-the-art sports facilities, according to Ferry, who likened it to a small college. There are no lights on the football field, so the Coyotes will have to play home games at Valencia High. Ferry said the lights would come eventually.

Castaic fell to Adelanto in their 26-7 season opener at Valencia High on Thursday night, but with Ferry’s leadership and the vision and tenacity of coaches like Uebelhardt and baseball coach Darrell Davis, the school with a spirited membership of 1,200 is heading in the right direction.

Gage Gibson made history Thursday night, scoring the first varsity touchdown of the program on an 81-yard catch from quarterback Dominic Espinoza.