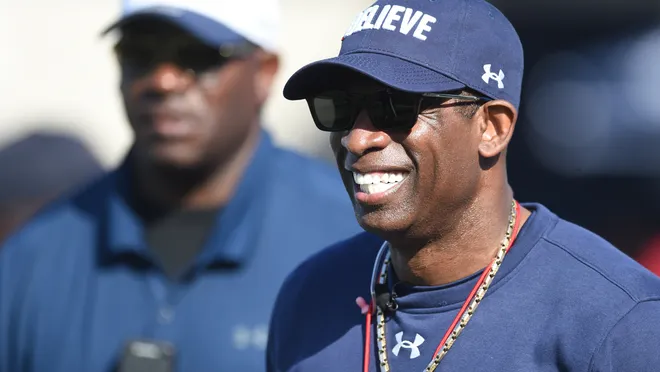 Jackson State coach Deion Sanders paid a surprise visit to rival Mississippi Valley State, where he met with coaching staff and toured football facilities, he said in a video posted to his Instagram page.

Although he described the campus as beautiful, Sanders was unimpressed with the Delta Devils training ground.

So, Sanders called on his supporters to help him build a new ground for MVSU. He undertook a similar project at Jackson State where JSU installed a new grass practice field outside the Walter Payton Center.

“After seeing all of this, it’s time for me to go to work,” Sanders said. “My goal is to help Coach (Vincent) Dancy, his staff and those wonderful athletes out there. We need to build a playground for them. It won’t be grass, it will be grass. But I need you to help me maintain it, keep it nice and green so they can excel.

Sanders said he was looking to start working on the pitch as soon as possible.

After leaving the field, Sanders had lunch with Jackson State alum Dancy and Mississippi Valley State running back Caleb Johnson, who is on his Prime Prospects list of 16 HBCU players, according to Sanders, who should be selected. in the NFL Draft.

“Caleb Johnson is a dog all the way, I’m telling you, he’s going to be a pro one day,” Sanders said.

Sanders was unable to make it to Itta Bena last season when Delta Devlis hosted Jackson State. It was one of three games he missed after having two of his toes amputated due to blood clots that caused circulation problems in his leg. Jackson State won 28-19.

“You see, I was injured, I was in the hospital, I couldn’t make this game,” Sanders said. “But it was a tough game, and it was a great game. And he (Dancy) told me about some of the trials and tribulations that they have at Mississippi Valley State, among other things.