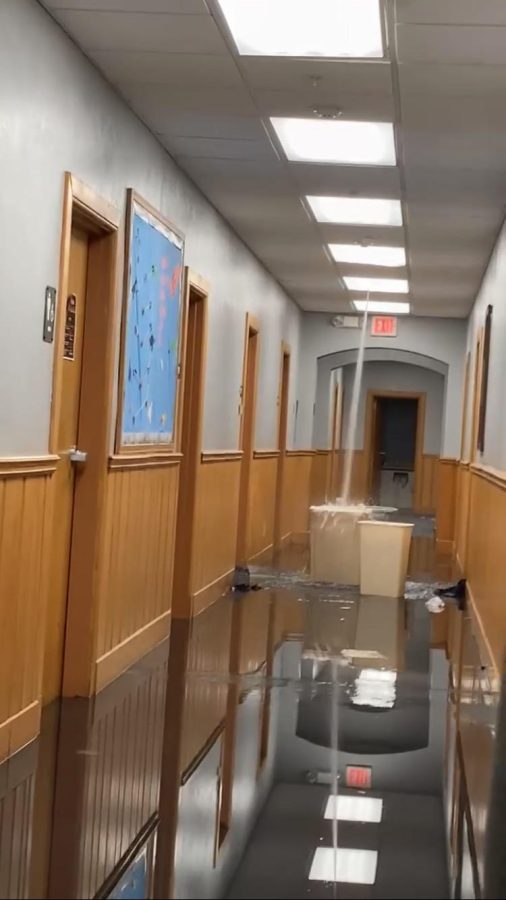 “Right away I called maintenance, no answer, so I called pro-staff. Afterwards I notified security and Russ was able to turn off the alarm, but I had to wait for maintenance to shut off the water,” Livingston said.

Several other campus CAs arrived to help Livingston deal with the situation.

According to Livingston, the water shut off around 7:40 p.m. By then, a large pool of water had covered the hallway from the staircase to the living room. Seven rooms, including Livingston’s bedroom, were affected by the flood.

Livingston said it was around 8:20 p.m. when custodial staff arrived with Shop-Vacs to vacuum the water from the hallway and affected rooms.

“During this, I gathered the residents living in the hall and explained that there were seven rooms that had been damaged and four of the rooms had been badly damaged,” Livingston said. “Those living in the badly damaged rooms could be relocated if they wished.”

By 8:45 p.m., all residents were back to their usual routines. According to Livingston, a dozen residents were affected in total. The names of these students have remained confidential. All property damage to students was noted and forwarded to Ethan Brown, the hall manager.

“It was a major interference with the students’ routines for the night, although it was nice to have Monday off to figure out what the next steps are,” Livingston said. “As far as I know, one piece was completely moved and the others remained in the spaces.”

Matt Hansen, Dean of Students and Director of Residence Life, praised the quick and efficient response from those involved, especially Livingston.

“Garrett Livingston has done an excellent job of responding and coordinating with his residents. He deserves a lot of credit; he had to call security and residence life,” Hansen said.

Simpson is still calculating the amount of property damage to both school and student property.

“Our primary focus is making sure people are held accountable and everyone gets that restitution. Figuring out how to get people back to where they were,” Hansen said.

Hansen acknowledged it was an accident and those responsible took responsibility for their actions. Either way, he said the incident serves as a reminder that seemingly innocent actions can have disastrous consequences.