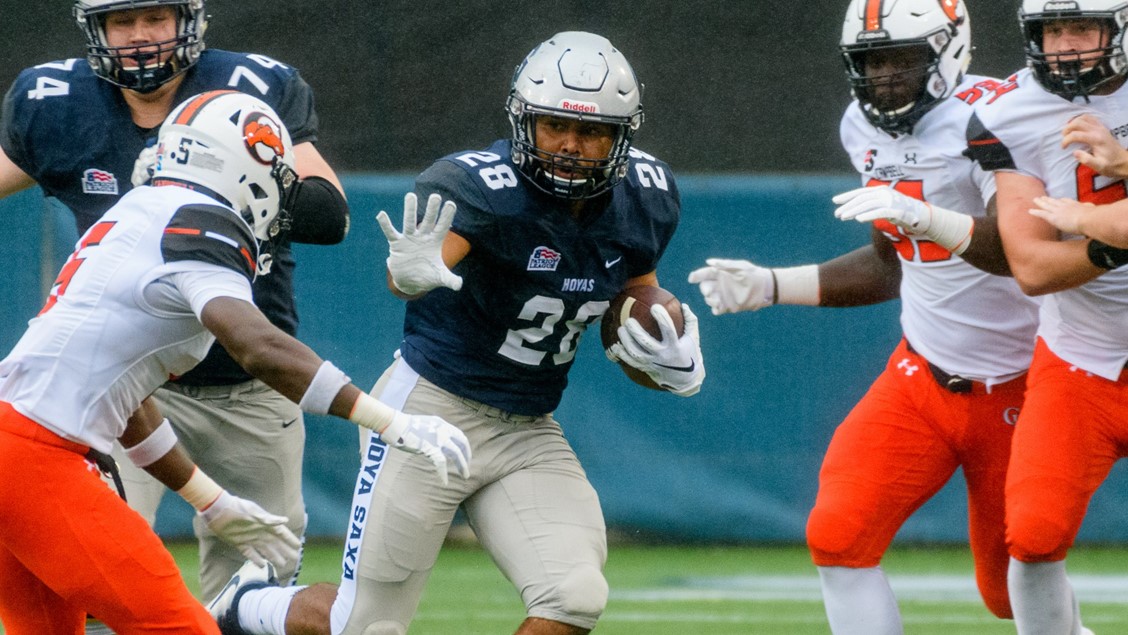 Last season the only sounds that came out of Cooper Field were construction. There were no fans, no Pep Band and no players. COVID-19 has shut down the Georgetown football program. When fans returned to the Hilltop, they found a newly renovated stadium in place of the once dilapidated pitch. Unfortunately, a new domain did not lead to new fortunes. For the ninth consecutive season, the Hoyas finished with a under .500 record, leaving fans wondering what the team’s next step is.

Rob Sgarlata has been the program’s head coach since 2014. With a younger squad and newly renovated sports facilities, Sgarlata hoped the squad would come back from their nearly two-year hiatus stronger than many of their Patriot rivals. League. “The goal of this program is the goal of everything in Georgetown – it’s excellence. We expect to come out and compete, ”commented Sgarlata in a preseason interview with the Voice.

After a disappointing season, however, Georgetown football has once again over-promised and underrated its fans, finishing sixth in the conference only above Bucknell University. Georgetown had an optimistic season opener against Delaware State University, coming back from a 14-point second-quarter deficit and forcing the game into overtime. A field goal blocked by Georgetown senior linebacker Justin Fontenoux made the difference, allowing Hoyas junior backer Joshua Stakely to find the end zone for a draw victory.

Returning to the renovated Cooper Field with a win under their belt should have given the Hoyas an advantage over Harvard, a team that hadn’t played a game since they were 4-6 in 2019. Instead, the Crimson trampled the Hoyas, 44-9.

The Hoyas’ loss to Harvard set the tone for the remainder of the season, as Georgetown lost the next three games and eight of their last nine, including a stunner at Lafayette end of October. Their only other win of the season came against conference long distance players Bucknell, whose overall record was 1-10. Even this victory was not easy, as the Hoyas clinched a 29-21 victory.

The Hoyas ended their season with a 28-21 loss to Morgan State University, their 17th season-ending loss since 2000. The Hoyas got off to a promising start, leading the Bears in the first half 14-0. In classic Georgetown form, the Hoyas lost momentum in the second half, ultimately losing by a touchdown.

The team struggled to integrate freshmen and sophomores into their veteran squad. With just over half of the squad never playing at the college level, the Hoyas have a different dynamic than most other teams, who rely more on their older players.

“This is the most unique team we have known,” said Sgarlata of the age composition of the team.

Sgarlata looked to his returns to lead the team. Graduating players Neal Azar, Joseph Brunell, Owen Kessler and Ahmad Wilson stayed around for their extra year of eligibility and were named team captains before the start of the year. Pandemic restrictions on in-person gatherings have hampered normal team-building efforts.

As the restrictions eased in the spring, the team was able to organize a modified face-to-face training session. According to Sgarlata, about 80 percent of the team attended the sessions.

“It’s good to have a normal routine as we prepare for the season,” Sgarlata noted at the time.

Obviously, this routine was not enough. Despite efforts to bring in new players, there was still a gap throughout the season as many young players never saw the time on the pitch and were eclipsed by the fifth-year players. At least the young players were able to get a feel for how college football is working, providing a more confident group of leaders next year.

Despite the difficult season, an indisputable positive point was the long-awaited opening of the renovated building Cooper field. After several delays and funding issues, the field promised to be Georgetown’s new and improved football home. A 2015 $ 50 million donation of Georgetown, parents Peter and Susan Cooper helped create permanent locker rooms, as well as increased capacity in the north area and west stands to accommodate 3,750 people.

“Between the additions and renovations at the Thompson Center and Cooper Field, our facilities are as good as any you’ll find at FCS,” said Sgarlata. “All athletics has a home, and I think it’s huge not only with our players, but also with our players, our staff, our coaches to have a home and kind of build that community.”

These renovations should have helped the team generate a home base full of energy to cheer on their subclass heavy team. The stadium was a draw, with home games averaging over 2,250 fans per game. But higher attendance couldn’t translate into performance on the pitch: the Hoyas failed to win at home, even once this season.

The 2021-22 season will be remembered as a year of reconstruction. Overall, the team finished well below expectations. In the 2019 season, the Hoyas finished with a 5-6 overall record and were second atop the Patriot League. This season they were 2-8 and second from the bottom. Hoya’s performance was not due to a lack of senior leadership or individual talent, as they both have.

Seven Georgetown players have been named to the 2021 All-Patriot League squads, proving that this list can compare to their opponents. Senior wide receiver Joshua Tomas makes history as Georgetown’s third-ever first-team offensive player after totaling 732 yards and 4 touchdowns this season. Tomas is joined in the first team by Wilson, who led the team defensively with 71 total tackles and one interception, and second-year punter Conor Hunt, who topped the Patriot League with an average of 41.7 yards. by punt. Three defensive players, linebacker Kessler, senior defensive lineman Ibrahim Kamara and junior offensive lineman Talati Polamalu, have all been named to the All-Patriot League second team, along with senior tight end Zach Jewell.

“There are guys who have stayed with us and helped us build this program into one that will compete for a Patriot League title in the future,” said Sgarlata. “There were a lot of positives, but we didn’t finish on the scoreboard. “

This season has clearly shown that individual talent is not enough for the Hoyas to win.

With a vibrant mindset that supports their growth as a team rather than as individuals, the Hoyas can look forward to entering the 2022-2023 season ready to make some noise in the Patriot League.

“The last game of the year is always tough, especially this year with the fifth-year seniors and the seniors,” Sgarlata said in a statement. maintenance after the loss to Morgan State. “We will continue to work with our young players. We’re excited to go into spring and start recharging everything in a normal year. “