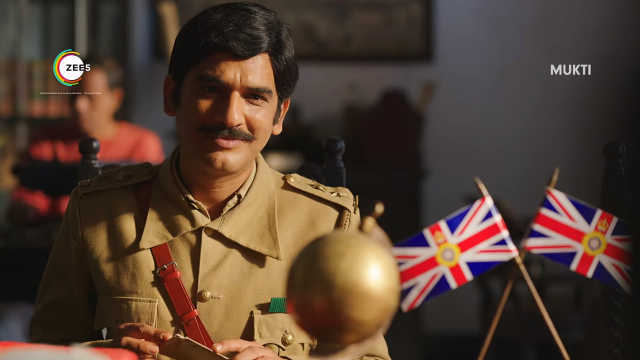 The next series Zee5 Mukti, directed by Rohan Ghose and starring Ritwick Chakraborty, Arjun Chakraborty and Sudip Sarkar, is set in the early 1930s.

The teaser sees prisoners at Bankura District Prison challenging their British overlords to a football match, as a form of resistance.

As the poster slogan suggests, there were many demonstrations of resistance during the time, but the goal was one: defeat the colonizers.

In the teaser, a British officer first discusses reform measures undertaken by a police officer, played by Ritwick, in the prison. We see prisoners subjected to extreme torture. The British officer considers himself a ringleader, as he takes sadistic pleasure in treating inmates like chained animals.

The character of Arjun believes in fighting for the rights of compatriots using force; however, Sarkar’s character speaks of adopting non-violent means to achieve the same end.

In the movement logo, which was launched last month, a bullet was depicted demolishing a Union Jack. The teaser makes it clear that eventually the prisoners, with the help of sympathetic police, challenge the British to a football match during the series.

Golondaaj, recently published by Dhrubo Banerjee, described how, under the leadership of Indian football father Nagendra Prasad Sarbadhikari, a motley group of Bengali players helped their compatriots to claim their rights. Mukti, however, seems to focus more on the spirit of freedom struggle, highlighting the blatant cruelty of the colonizers.

Mukti, which also stars Chitrangada Shatarupa and Ditipriya Roy, will air from January 26.

Check out the teaser below and let us know if you’d like to watch the series.