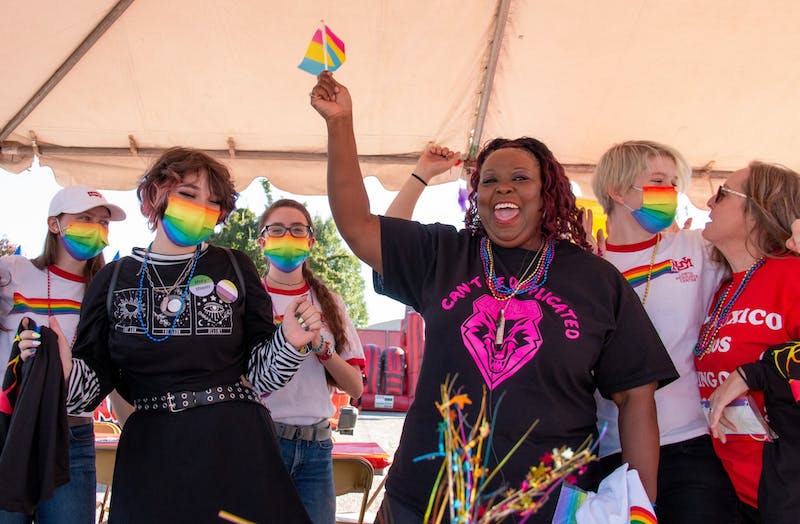 On October 16, the Howl Zone was screaming with students from the University of New Mexico’s LGBTQ Resource Center as they gathered under a colorful tent in the tailgate section next to the varsity stadium to celebrate National Coming Out Day, October 11.

“Part of the reason we picked today (for the hatchback) is that October 11 is National Coming Out Day and so we’re having that kind of end party,” Frankie Flores, Center Director. LGBTQ resources, mentioned. “We go out for sports.

Before the Lobos faced off against the Colorado State Rams, attendees at the LGBTQ tailgate tent had the opportunity to eat snacks, grab a shirt pleading for racial justice in the queer community, and watch drag queens play. .

The drag queens made their presence known, which was clear from the start when the iconic opening synth chords of Britney Spears’ “Toxic” sounded to the accompaniment of the elaborate routine of the first Queen Kiki Stratton, drawing in the students. out of the tent to watch them.

The next two queens, Allison Saint and Kuwani, continued to encourage the audience to participate in an interactive performance outside the tent. Although the Howl area was not particularly busy during the afternoon, the queens’ performances stopped more than a few passersby.

The event was made possible by Amanda Carroll, Graduate Assistant of the Athletics Academic Program, who contacted the center with ideas on integrating LGBTQ issues into athletics.

“We really wanted to have a space where our LGBTQ student-athletes and the LGBTQ Resource Center could collaborate and come together… (This event) reflects how we just wanted to give them a space to come out and be themselves,” said Carroll said.

Carroll and Flores said they want this event to launch future collaborations between the LGBTQ Resource Center and the track and field program in the future.

Shelby Kleinhans is the multimedia editor of The Daily Lobo. She can be contacted at [email protected] or on Twitter @ BirdsNotReal99