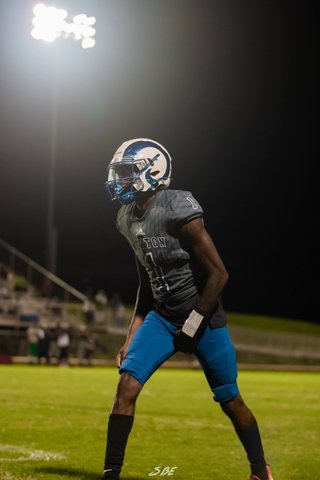 Differences abound between soccer and basketball. The biggest difference so far for Brown has been celebrating his score.

While comparing it to a basketball dunk, Brown said scoring a touchdown was better.

“Catching a touchdown is much more exciting,” Brown said. “My teammates rushed me and it feels good. It makes you feel emotions that go through the roof.

Some skills Brown developed through his game of basketball helped prepare him to play football. For example, the 6-foot-3, 185-pound eldest said his speed, jumping ability and having “good hands” paid off on the football field.

“I just got blessed with the talent to play different sports,” Brown said. “I am a great athlete and I love sports.”

One thing that has stuck with Brown’s basketball career is his competitive nature. According to Brown, he remains fully aware of his surroundings on the pitch and remains cautious at all times.

But his class AAAAAA football experience in Georgia has also shown him something that he believes will help improve his basketball performance.

“You have to be super physical no matter what sport you play. And this sport showed me that,” Brown said. In football, you play against big personalities. So when I bring this to court, I’ll be super physical. Last year I could jump over people, but I wasn’t physical. I feel like now I could get physical with the best of them.

Now Brown will continue to play for the Rams football team during his senior season. But he will join the basketball team at the end of the season.

And, while his commitment to Georgia State is for basketball, that could change.

“I fall in love with football,” Brown said. “Basketball is my main sport, but I could go to college and play football, I think.”