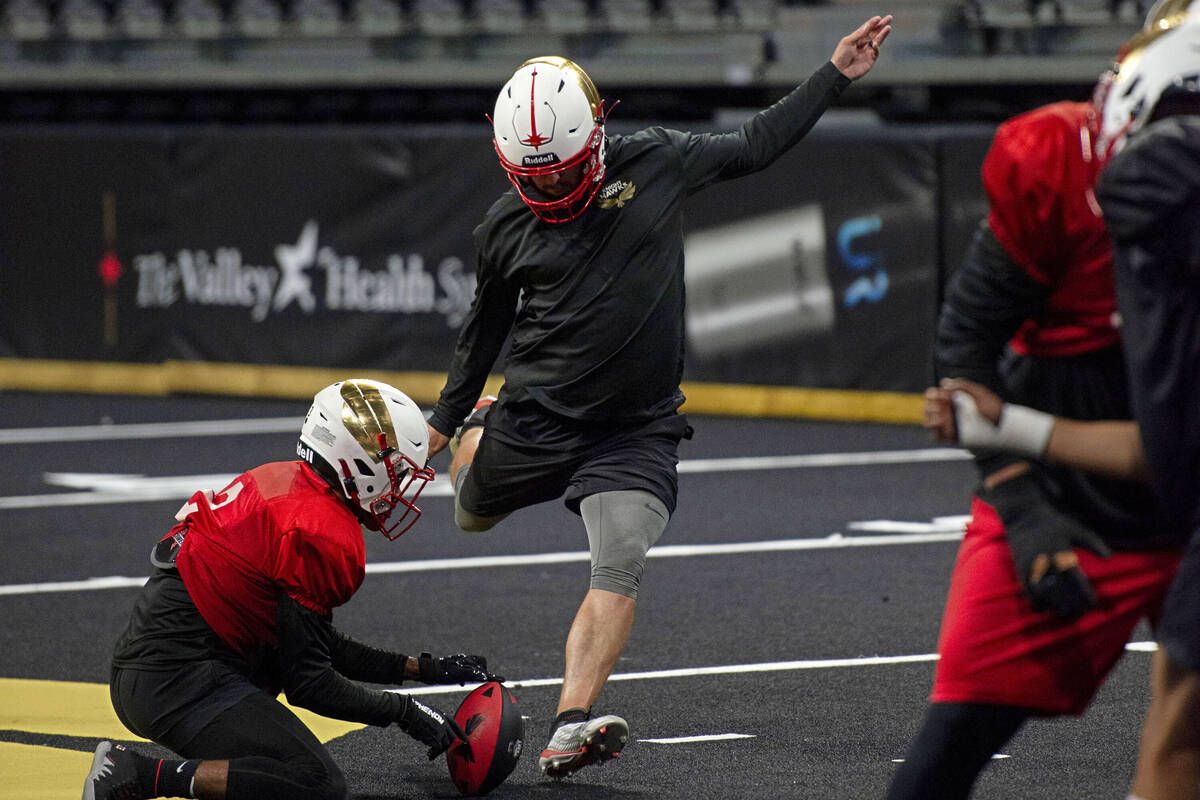 In a group chat between players, there was a screenshot of what appeared to be their special teams coordinator and teacher at Faith Lutheran Middle School, Nolan Kohorst. It was, of all places, on a Knight Hawks social media page.

Kohorst, a Green Valley high school student and UNLV graduate, found his way back to the football field as a kicker for the Knight Hawks.

“For me to think it was possible a year ago, I don’t think I would have believed it,” said Kohorst, whose Indoor Soccer League team hosts the San Diego Strike Force ( 2-9) at 6 p.m. Saturday at The Dollar Lending Center.

When the Knight Hawks (4-7) announced open tryouts late last year, it piqued Kohorst’s interest. But because of a scheduling conflict with his school, he couldn’t come.

Kohorst reached out to Knight Hawks coach and general manager Mike Davis on social media about the team’s kicking situation. He sent Davis a game tape, and Davis liked what he saw. But Davis had already committed to a kicker.

Davis told Kohorst to stay ready in case anything goes wrong. A few weeks into the season, the Knight Hawks decided to make a change and Kohorst wore a new uniform.

“I got a call that said, ‘Hey, our kicker isn’t kicking enough. He’s making a few mistakes. We want you to come and play next week,'” Kohorst said. Tuesday morning and Friday evening I had a game.”

Kohorst made his Knight Hawks debut on April 8 against the Arizona Rattlers. Since joining the Knight Hawks, he has added stability to the job while managing his time to fulfill his teaching responsibilities.

Kohorst’s last game before joining the Knight Hawks was with UNLV at the Heart of Dallas Bowl at the end of the 2013 season. He finished his career (2010-13) as the school’s leading scorer (247 points), but he has since been passed by running back Lexington Thomas (2015-18, 258 points).

He looked for opportunities to further his football career, but nothing materialized. He entered teaching as a long-term substitute for the school district, then taught social studies at Basic High School and SLAM Academy.

In early 2021, he moved to Faith Lutheran as a long-term substitute and eventually took up a full-time position as a sixth-grade teacher at the start of last school year, specializing in math, science and in history.

When Kohorst was reaching an agreement with the Knight Hawks, he made it clear he couldn’t leave the classroom.

“My career will come before training,” Kohorst said. “I have some leeway and a few personal days that I could take from work, but (teaching) is going to come first.”

Davis and the Knight Hawks were more than willing to accommodate Kohorst’s schedule.

“I wouldn’t take anything away from his work, but he had to take his time,” Davis said.

During the school year, the Knight Hawks practiced in the mornings and Kohorst had teaching responsibilities from 7:30 a.m. to 4 p.m. But Kohorst had access to the Dollar Loan Center when the Knight Hawks field was down. He kicked around the arena when he could, or at Faith Lutheran, or in a park.

In addition to allowing Kohorst to miss official practices, Davis and the team waived a trade clause in his contract, ensuring he could continue teaching.

Kohorst also had to get used to playing football again and learning the rules of the indoor game. Even with the learning curve, Kohorst’s work ethic has shown itself to his team over the seasons.

“It was a pleasant surprise to bring him in and let him work on his craft,” Davis said. “He makes no apologies. He doesn’t get rattled, and that’s what I like about him.

Support for the Lutheran Faith

Kohorst received support from everyone at Faith Lutheran when he returned to the field. None bigger than his fans in the classroom.

“My (students) are more excited than anyone,” he said. “I’ll come back, and they’ll say, ‘We watched your game’ or ‘We went to your game this weekend.’

“It’s great to have that kind of support from them.”

At the same time, Kohorst was hired as a teacher for Faith Lutheran, he was also promoted to special teams coordinator for the high school football team. He had a pre-existing relationship with coach Mike Sanford, who recruited Kohorst for college.

Kohorst’s knowledge of special teams, now enhanced by professional playing experience, has helped his development as a coach.

“It’s a very good thing for our team and our players,” Sanford said. “We have very good specialists here, and it’s good for them to have this connection with Nolan, who plays professional football.”

Chittenden and the other specialists constantly rack Kohorst’s brain about the difference between indoor and outdoor play, even asking him to bring the soccer balls he uses for practice. When he’s with the Knight Hawks, Kohorst is always looking to apply what he’s still learning to his players.

“He played at a high level of football and he knows what works and what doesn’t,” Chittenden said. “We respect his knowledge of the sport and he’s really helpful to the team.”

With school out for summer vacation, Kohorst is spending more time with the Knight Hawks and can focus more on his kicks. Even with a lot on his plate, he enjoyed every minute of his busy schedule.

“It’s amazing at 30 that I can do this,” Kohorst said. “It’s great to say that I am a professional athlete for the local team. It was an incredible experience.