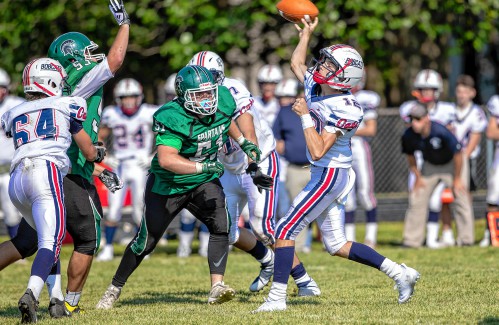 Highlights: The Spartans fell to the Owls of Division II in the east.

Strong points: Kearsarge led 14-8 after the first quarter, 26-8 at the halftime and 34-14 at the end of the third quarter, and earned his fourth straight victory to hang on to the fourth and final playoff spot of Division III.

Highlights: Both teams scored a goal in the first half and scored goals in the third quarter, but Aubrey Fischer’s goal put the Generals ahead and Bolduc gave John Stark some confidence, scoring two goals on corner. The Generals will be the No. 4 seeds for the Division II tournament.

Coach quote: â€œIt was an exciting game. Both teams played well. We really like playing on the grass because we think it accentuates our skills a lot. Scoring three goals from the corners was huge because we had to start to execute them better. Excellent regular season for our team and we are delighted to start the playoffs on Tuesday. “- Dennis Pelletier from John Stark

Highlights: Kearsarge scored the only goal of the game at 11:18 in the fourth quarter. The Cougars will host their first tournament game next week.

Coach quote: â€œTonight could have been anyone’s game. Mascenic has excellent batting skills and moves the ball well. We were happy to end the regular season with a win and look forward to the playoffs. – Chelsea Williams of Kearsarge

Highlights: The Hawks celebrated Senior Night with their second victory over the defending champions and securing the No. 1 seed for the Division III tournament.

Coach quote: â€œThe girls worked hard and played a good game of field hockey today. I’m proud of this team for finishing the regular season without a defeat. We are now focusing on the playoffs. – Kate Hohenberger of Hopkinton

Highlights: Tremblay found the back of the net four times as the Giants drew their second straight game.

Coach quote: “Overall we did our best and the game was balanced with a lot of opportunities for both teams.” – Bishop Brady’s Cevat Vural

Highlights: LaValley made a best-times header on an Edwards cross for one of Hillcat’s goals.

Coach quote: “It was great to see the girls working hard and making passes.” – Makayla Savoy from HD

Highlights: The Hawks scored three goals in the first half and scored four in the second.

Coach quote: â€œI was really happy with the Lady Hawks’ performance today against an athletic team from Derryfield. Derryfield are well coached by Jim Watt so I was impressed with how quickly we attacked their defense. I was also happier today with our defensive pressure. – Mike Zahn from Hopkinton

Coach quote: â€œMilford played a great game today, moving the ball and making some great plays. Our schedule and repeated overtime has caught up with us today physically and mentally. – Chris Pike from John Stark

Highlights: The Cardinals scored two goals in the first half. Spanos scored in the second half to reduce Kearsarge’s deficit to 2-1, but couldn’t close the gap further, and Stevens added an insurance tally.

Coach quote: â€œI felt we played a much better game than the score showed. Our defense played big against a very talented attack from Stevens. Offensively we had our chances, but (Stevens’ goalie) was great in goal for them. – Dave Smith from Kearsarge

Highlights: The Spartans had a huge result, holding the Falcons to a scoreless draw in a game at Bow.

Strong points: Fitzgerald confidently finished a shot from a touch in the 17th minute, while Condon scored a quality free kick from Duval in the 29th. Bassett used his height to score his goal in the 71st minute, before the Royals broke through in the 79th.

Coach quote: â€œNice, solid win today as we continue to do a good job focusing on the job at hand and just playing good football. In particular, Peyton Marshall on the center back and Gavin Nestler on the outside of the back have recently anchored the team and foiled a lot of attacks before they could even really start. – Scott Zipke of Hopkinton

Highlights: The Hillcats kept the Vikings off the board until two minutes left in the game and HD ended their three-game losing streak.

Coach quote: â€œTonight’s senior game was a great celebration of our own seniors, as well as the seniors from West. We had a very large CBNA fan base of friends, family and faculty coming to support the team in what is the final home game of the senior regular season. Monday we’re going to focus on a tough final week of the season before we move on to the playoffs. “- Christian Gompert of Coe-Brown