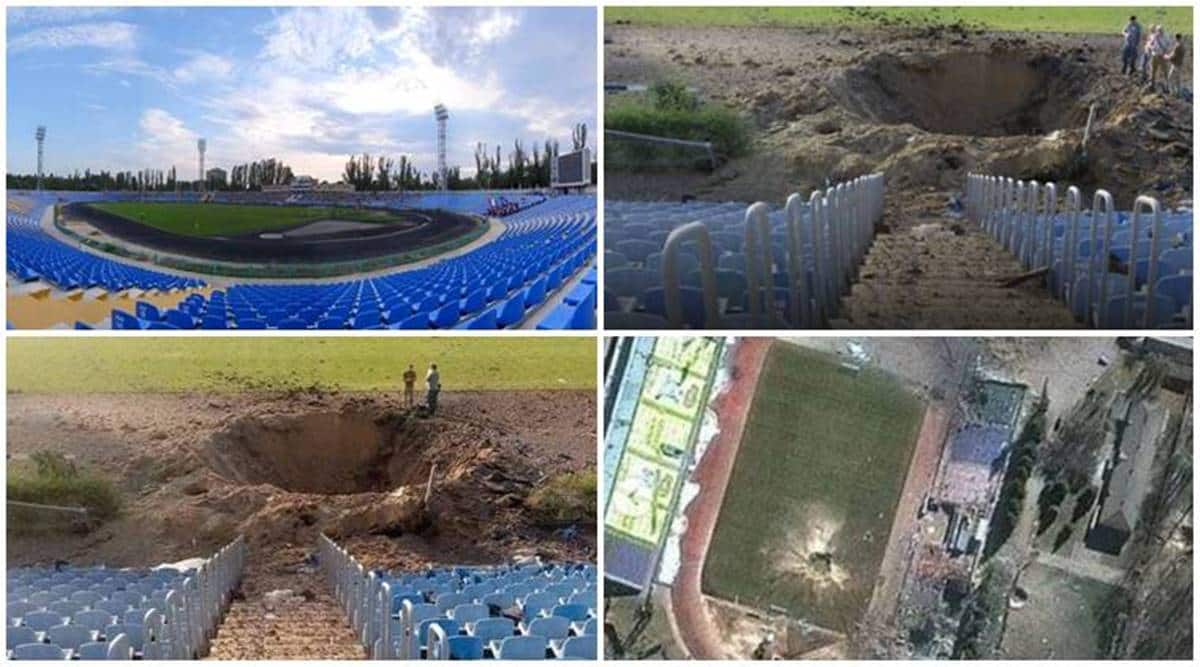 It has been exactly 125 days since the Russian invasion of Ukraine began on February 24. Facing a heavy artillery barrage, the southern Ukrainian city of Mykolaiv suffered the brunt of the attack and on Tuesday its central stadium, also known as Stadion Tsentralnyi was hit by a missile .

“On June 28, Mykolaiv and its suburbs came under a massive missile attack launched from the Bastion coastal missile system located in the occupied Kherson region,” the press service of the Mykolaiv regional administration said on Facebook.

Ukraine’s air defense systems could intercept 3 out of 8 missiles today; but the rest hit various targets in Mykolaiv, including a military station and the stadium, leaving a crater 15 meters wide and 5 meters deep. Central City Stadium, built in 1965, has a capacity of 16,700 and is the home stadium of MFK Mykolaiv football club (one of the oldest football clubs in Ukraine).

According to preliminary information, no casualties were reported at the stadiums, but the citizens of the country expressed their anger and dismay at the development.

Ruslan Malinovskyi, a Ukrainian professional footballer who plays as a midfielder for Italian Serie A club Atalanta and the Ukrainian national team, shared a photo from the stadium and expressed his shock. Anton Gerashchenko, adviser to the Ukrainian Minister of Internal Affairs, wrote: “It used to be a lawn of the main stadium of Mykolaiv. Now it’s a crater. Imagine what kind of rockets the Russians hit the city with.

In the morning, the enemy attacked Mykolaiv, hitting the central stadium.
Here are exclusive photos of what it looks like now by Heorhii Ivanchenko for the Center for Strategic Communication. pic.twitter.com/cSZGrEijiF

“The central stadium of Mykolaiv at dawn was subjected to a missile strike by Russian troops. Not a strategic site, but a civilian site. Thank goodness it was so early that no one was there for a morning jog at the stadium,” Serhiy Leshchenko, adviser to President Zelensky’s chief of staff, wrote on social media.

“Another attack on civilians and another reason to declare Russia a sponsor of terrorism,” he added.

The official Twitter account of the Ministry of Defense of Ukraine also wrote a heartfelt message: “To football fans around the world – first we will win the war, then we will bring football back to our cities.”

To football fans around the world – first we will win the war, then we will bring football back to our cities. pic.twitter.com/mcJlorndBZ

Oleksandr Senkevych, Mayor of Mykolaiv, spoke to Ukrainian media outlet Ukrainska Pravda and confirmed the development and said: “Russian troops fired 8 missiles at Mykolaiv on the morning of June 28, damaging the abandoned base of the 79th Brigade of the Ukrainian Armed Forces and the central city stadium.

Central #sport stadium, with recently renewed infrastructure and pitch, in Mykolaiv in the south of #Ukraine. The city came under a massive missile attack this morning. Luckily no one was there to practice today #StandWithUkraine

Once upon a time 🏟️ ​​/ Today after the bombings 🕳️ pic.twitter.com/arzMUUZcqW

According to the mayor, a missile fell on the recently repaired city stadium, forming a funnel 5 meters deep and 15 meters wide. Last year it was completely renovated with new furniture, technical equipment, computers and a new pitch with underfloor heating. Everything was destroyed.

“We built a brand new heated field – the missile hit it, directly into the bowl of the stadium, leaving behind a crater 15m wide and 5m deep,” Senkevych added.

Will the stadium be rebuilt again? “Yes of course,” said Mayor Senkevych.

On June 28, 2022 from five in the morning hit a missile strike in Mykolaiv. 3 missiles were shot down by air defense. One of the missiles hit the central stadium.

June 28, 2022 from five in the morning 🇷🇺 hit a missile strike on Mykolaiv. 3 🇷🇺 missiles were shot down by air defense. One of the missiles hit the central stadium.#RussiaIsATerroristState@europarl_fr @coe @antonioguterres @vonderleyen @olafscholz @emmanuelmacron pic.twitter.com/LTOzlbMBAE

Notably, the football field was not the only sports infrastructure damaged. Last Friday, the sports complex of the Polytechnic Institute of Kharkiv was hit by several Russian cruise missiles, without causing any casualties.

Anna Hin: “My father Yosia is 80 years old. He left university to take care of me and worked as an electrician on construction sites in Kharkiv.

He was very proud to work on the sports complex of Kharkiv Polytech, revolutionary for that time.

Today I had to tell him that a 🇷🇺 missile destroyed him.

The sports complex of NTU “KhPI” is located in the Youth Park of Kharkiv. It was built between 1985 and 1991 and has 14 gymnasiums, two swimming pools, one of which is 50 meters, and special courts for practicing various games, including table tennis, gymnastics and aerobics.

While the availability of such a complex gives students and university staff the opportunity to be active in sports, the destruction of the facility is indeed a sad outcome.