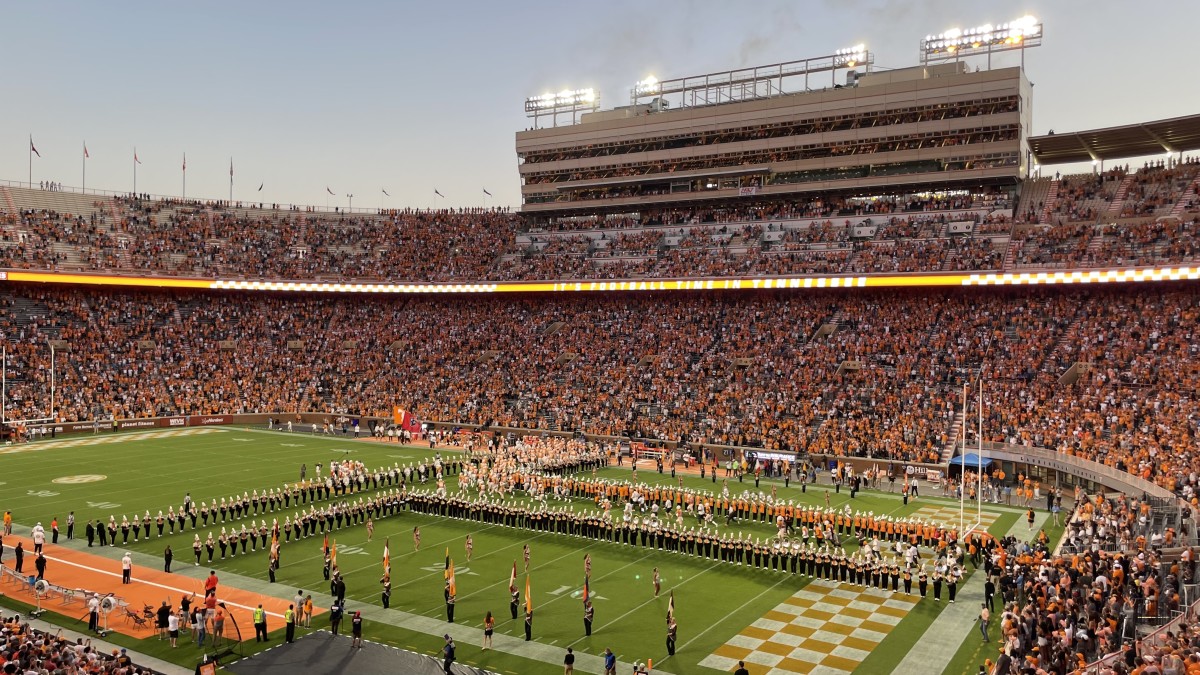 Next in a Road to CFB series of first-hand matchday experiences at stadiums across the country:

Tennessee football game day is a rite of passage. Neyland Stadium should be a must on any sports fan’s bucket list and it’s something I have to tick off this year.

“Brett, I can’t believe you made your first trip to Neyland on a Thursday night against Bowling Green.”

The number of times I’ve been told my game choice sucks is significant. But listen to me, this one mattered. For one thing, I’m a third-generation BGSU graduate. Also, I locked this when it was still Saturday.

What a great day it is when volunteer football is played on Rocky Top. A game day in Tennessee — any day of the week — is matched by few and beaten by even fewer. We started our game day downtown at Market Square, a collection of local restaurants and hole-in-the-wall shops and bars. I would personally recommend a burger from Stock & Barrel (and one of their Tennessee whiskeys).

Parking is free around Market Square for the whole day if you: a) arrive early and b) don’t mind exercising. A mile and a quarter walk to Neyland Stadium sends you just past the spats and across campus. Well worth the walk for sightseeing.

A few places in the country have Sailgaiting. Baylor, Washington and Tennessee are the ones I know of, although there may be others. Despite my best attempts, I was unable to access the sailgate. But seeing the boats on the Tennessee River with revelers and fans is a delight. Other traditional tailgates flood the streets around campus. After all, this is the SEC we’re talking about.

Arrive on campus early as the drop-in band is one of the best in the country with one of the most iconic fight songs.

Many college football stadiums are revered, but a few are truly hallowed grounds; The Neyland Stadium is hallowed ground. It’s a historic stadium with few changes since its final expansion in 1996. Throughout my life, this stadium has been more or less the same.

Like many old stadiums (it was inaugurated in 1921), the halls look like dungeons: dark, cramped, winding. But there’s just something different about being at Neyland.

This game was special for many reasons, but it was really special because I shared the day with my dad. Growing up, he went with his dad to a game in Knoxville (a Cleveland Browns scrum) and we continued the tradition.

Tennessee fans were more than accommodating. Southern hospitality was at its best that day – probably because what kind of threat did BG pose to them? – and we were greeted with lots of “Welcome to Rocky Top” and smiles. Fans make or break a game day and Vol fans absolutely made this one.

The Rocky Top fight song is my favorite in the country. It’s a good thing, because it’s played to death. I mentioned making sure you attend the band march before the game and I really mean it. They wind through campus and under the UNIVERSITY OF TENNESSEE Bridge to Neyland. It’s spectacular and thousands of fans participate. Maybe even tens of thousands.

I can imagine what the atmosphere is like at a Tennessee football game against a player from Florida or Alabama. Against Bowling Green, it was over-excited (for starters, the excitement died down when the Vols took control). Against a big rival in the SEC, this place has got to go crazy.

The student section is quite intimidating considering its size. Orange pom poms are a staple and they can get rowdy. Yes, I saw what happened against Ole Miss last year.

The only thing that doesn’t seem like a big deal until you’re there is that the sound system was struggling. Not having a PA announcer is weird and creates dead air between rooms. Not ideal for week 1.

Tennessee beat the little guy 38-6. What more can be said?

Seriously, the score didn’t accurately paint the picture. The Falcons really hung on and it was a 14-6 game at halftime. In fact, it was only 28-6 going into the last quarter.

Stadium: A. Sometimes a musty old stadium is good for the soul. History is within the walls of this place. I love it.

Tradition: A+. Hardly anywhere has as much history and tradition as Tennessee. Rocky Top, Running Through the T, Smokey their dog mascot, checkered end zones, love it all.

Atmosphere:C. I have to put my wide-eyed amazement down for this one. It was an 8:00 p.m. Thursday night kickoff against Bowling Green. I would be lying if I said it was an amazing atmosphere. The not really working sound system didn’t help either. Against a big rival with a prime time Saturday kick off, I’m sure it turns the tables.

Fans: A. They are passionate, friendly and dedicated. Tennessee has provided some of the best fan experiences I’ve had along the trip and it’s definitely the kindest. Now, if I walked in on the third Saturday of October wearing the wrong colors, maybe that’s a different story.

Extracurricular activities:B-. Knoxville is a cool college town with a quaint but really nice downtown. Great Smokey Mountain National Park is nearby, but Knoxville is quite a distance from the scene. It’s a three-hour drive from Nashville and Atlanta, and four hours from Charlotte. If you are unable to drive sensibly, you will have a very hard time getting here. However, the journey is worth it.

Do you want to join the discussion? Click here to become a member of the Killer Frogs forum community today!