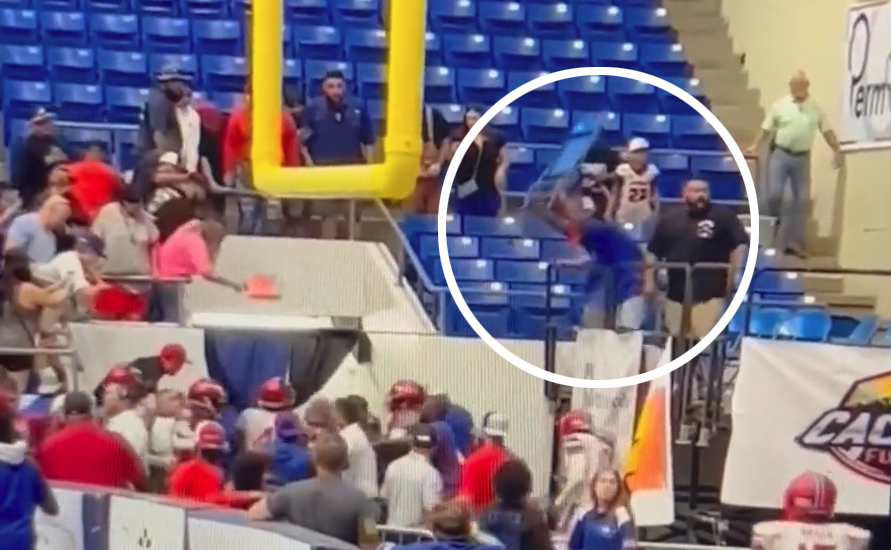 It’s true that everything in Texas is bigger, including arena football battles between players and fans in the stands.

Chaos erupted late Saturday night in the fourth quarter of a game between the West Texas Warbirds and Dallas Prime when players clashed and eventually fans in the stands at Ector County Coliseum in Odessa.

In a statement, Warbirds chairman Leif Kertis called the incident “embarrassing, regrettable and inexcusable”, adding that the organization is cooperating with local authorities.

“We are confident that once the details are known many things will be clarified. We can confirm that at this time no Warbirds players, coaches or staff are under investigation.

Much of Saturday’s mayhem centers around players battling fans and a fan hitting a player with a folding chair.

Kertis, who says his team is not being investigated by authorities, also noted that the person using the folding chair as a weapon “is not and has never been part of our organization at any title.”

“No matter where fault, blame or guilt lies, we owe the people of the Permian Basin an apology. You should never worry about your or your child’s safety when playing our games. We are taking appropriate steps to mitigate any possibility of respawns in future seasons by working with the Coliseum and ECSO on enhanced proactive measures as well as response management,” added Kertis.

Another angle of tonight’s fight pic.twitter.com/r5OASPnp0o

KOSA, the CBS affiliate in Odessa, believes the fight lasted an astonishing ten minutes, making it one of the longest fights between fans and players in football history.

It’s one thing to see some players trade punches during a football game in a heated arena, but it’s a whole other level to see a fan line up a premeditated metal folding chair pulled at the head of a football player. ‘an opponent.