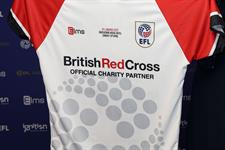 The English Football League has named the British Red Cross as its next charity partner, the two organizations have announced.

They said the partnership will raise funds for people suffering from loneliness in England and Wales, as well as reaching isolated communities across the country through the EFL and its 72 clubs.

The partnership will begin in July to coincide with the start of the 2022/23 season and is expected to last two years, the charity said.

The EFL will incorporate the British Red Cross logo on all EFL shirts and replicas for the coming season.

A spokesperson for Mind was unable to confirm how much the partnership had raised so far.

Trevor Birch, EFL Chief Executive, said: “Club allegiances and a love of the game provide a sense of belonging to millions of people in this country and we believe the partnership with the British Red Cross will help us bring more people together through the medium. football.

“The EFL and its clubs already provide life-changing work through its community network and with eight out of 10 people in the UK living within 15 miles of an EFL club, the collaboration with an internationally renowned organization such as the British Red Cross will help elevate the services that organizations provide to people across the country.

Paul Amadi, British Red Cross supporters manager, said: “We all know that football has the power to bring people together and we look forward to partnering with the English Football League to tackle loneliness. .

“The pandemic has exacerbated loneliness and left people feeling more isolated than ever. The lockdown has only amplified this deep-rooted problem, with millions feeling cut off [off] of the world they once knew.

“Although social distancing and other restrictions continue to be relaxed, the loneliness remains. Together we can help end the stigma of loneliness and connect people who feel lonely.