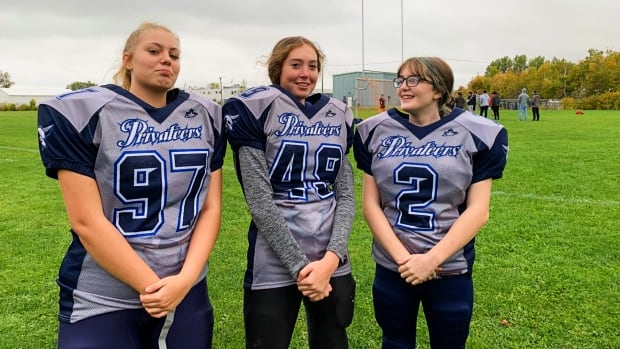 Penny Olscamp often played football with her grandfather before his death.

Frankie MacLellan has been playing wrestling with her two brothers for as long as she can remember.

And Cordelia Harcourt, well, she just likes to tackle people.

Whatever the reasons they decided to play tackle football in a boy-dominated league, the three girls – all aged 13 to 15 – have become a treasured and valued part of the Charlottetown Bantam team. Privateers.

They say the boys in the league don’t treat them any differently – they come home with a lot of bruises after a game. And they distribute it as well as they take it.

“It just seems more fun because I can get my aggression out of them better,” said Olscamp, who plays the role of wide receiver, cornerback and linebacker.

“I haven’t heard any negative comments from other teams so I think it’s going well.”

The three are the only girls on the Bantam Privateers team. There are eight girls who play American football on the eight teams in the Bantam and College divisions, for youth ages 16 to 18. Those who stick there can continue to play for the Island Demons in the Maritime Women’s Football League.

David Henderson, Managing Director of Privateers Football Club, would like to see more girls getting into the sport sooner.

He said girls, especially in the midget age, have been a “fantastic addition” to the Privateers program.

â€œGirls in the 13-15 age group are generally more aggressive than guys. They seem to have that aggression a bit earlier. So they’re generally a bit faster, a bit stronger and they tend to dominate. boys from the start. Guys catch up after 15 years. “

Recently, the Privateers have started providing shoulder pads specially designed for girls to make them feel more comfortable on the pitch.

The girls said they appreciated the gesture.

In a sport that has seen its share of misogyny and sexist controversy at its highest level, the NFL, girls and boys continue to play football in harmony in Prince Edward Island as part of the a strict zero tolerance policy for any type of discrimination.

The girls say they’ve never heard derogatory comments from them, and the boys on the team say they couldn’t stand it.

“I like to think it’s just one big family,” said Darcy Waye, a 13-year-old defensive end.

“We treat each other the same, with respect.”