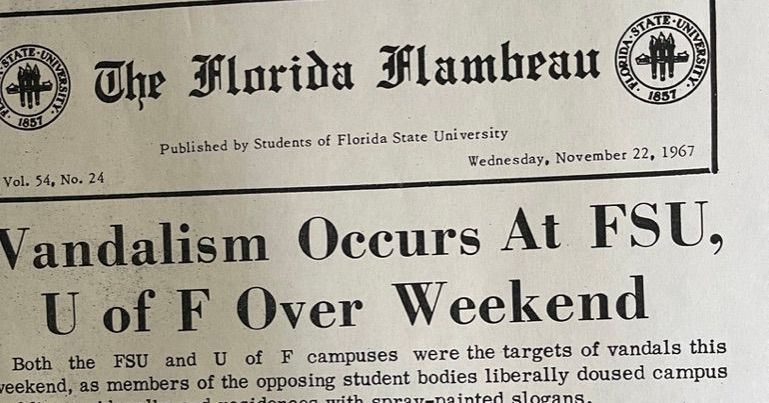 He did something stupid. He got caught. He paid his debt to society several times and he repented.

He gave up his old dubious lifestyle after serving his sentence. He paid his fines and is now an active member of society.

And now, after years of self-analysis, he’s finally ready to tell his uncut, raw, and unfiltered side of the story.

This historical first-hand account of a Seminole, of an unfortunate time in his past, is not meant as a TN endorsement of this type of mischievous behavior by students at Florida State University, but rather a reminder to be more careful and not to get caught.*

This is the true story of a Nole who managed to put his troubled past behind him and successfully overcome the stigma of being a Gator turf burner.

When I think back to that incident over 50 years ago, it’s not the 10 days in jail that bothers me, nor the hefty fine, the one-year FSU probation, the damage I caused to my law school projects, or the fact that I almost got killed and took innocent people with me.

No, it’s the bad reviews I got from the state press: “the lettering was jagged and sloppy”, “whoever did it gets D-minus in calligraphy”, etc.

Let’s go back to the beginning. On November 18, 1967, two friends and I were arrested for disorderly driving, and I alone for high-speed pursuit/speeding (driving over 80 mph through Gainesville in very dense fog). As Judge later wrote: “It began as a student prank before the Florida-Florida State football game on November 25, 1967, and it appears that when discovered, these students panicked without realizing that by doing this they were placing themselves in more difficulty.”

Maybe the night would have ended differently if we hadn’t made a painful blunder to admit. We started by driving in the middle of the night from Tallahassee to Gainesville with three cans of gas, one for each of us to register our assigned letter in The Swamp.

We were shocked to find the stadium buzzing and all lit up when we arrived, not having anticipated the preparations underway for Saturday’s Florida-Kentucky game.

Undeterred, we snuck into the field, wrote FSU with gas, lit our artwork, and watched in dismay as only two letters ignited.

In a ridiculously stupid move that would lead to our downfall, we searched for a gas station and returned to complete our mission, only this time to be greeted by police from all corners of the stadium.

Diving into my Chevy Impala, I then led campus, city, and state police on a high-speed chase through thick fog, only to find myself surrounded on three sides at a T-junction.

The rest, as they say, is history. FSU, led by Kim Hammond and Ron Sellers, won the game 21-16, their first victory in Gainesville.

I drove to Gainesville and spent three consecutive weekends in jail there. After the end of my probationary period, the incident was removed from my file.

Dean Schaeffer wrote a letter recommending me for law school, and Judge Hampton did the same. I then went to law school in Gainesville, then to the United States Department of Justice.

Not only did I get a prized position at the DOJ, but I also received all the awards they offer, and they even created a new one of which I was the first recipient. I finally obtained the highest competence and the highest ethical mark that a lawyer in the United States can have (AV of Martindale-Hubbell).

Editor’s note: One of my favorite moments setting this up was when I read this quote from assistant head coach Bob Harbison, who wryly observed:

“I sure hope a grad didn’t do it.” The lettering was irregular and poorly cared for.

***Special thanks to Eric, alias. Member TN MexiNole, for this exclusive contribution to Tomahawk Nation.