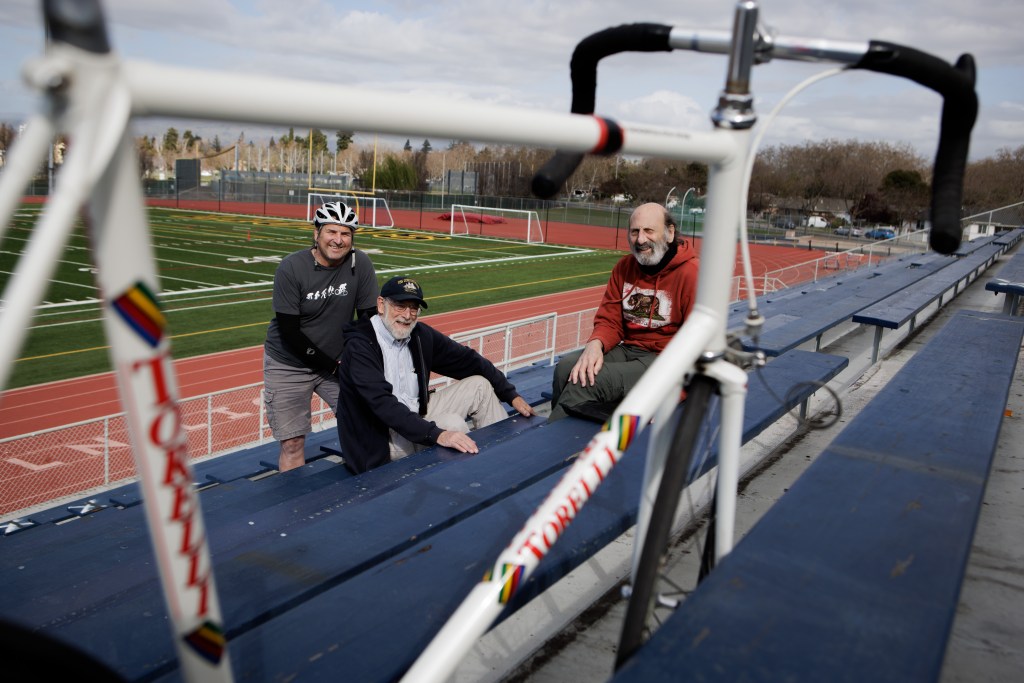 If you’ve attended a football game or other event at Lincoln High School Stadium, you probably didn’t know that racing cyclists rode the same location more than 80 years ago. Retired teacher and amateur historian Ed Hodges is working to change that.

Last week he got together with two other cycling and history buffs – Terry Shaw, Joe Halseth and Joe Wulftang – to celebrate the installation of an aerial photograph next to a plaque at the stadium which details the history of the Garden City Velodrome, which was better known to locals as the Burbank Velodrome.

The plaque was actually installed in 2004 after the Lincoln High football field was renovated and construction workers discovered the foundations of the old velodrome. “Nobody paid attention to the plate,” Hodges said. “So I took this beautiful aerial view of the velodrome and had it put on a metal panel. The photograph adds tremendous appeal to the average citizen passing by.

The foursome shared stories last week about the velodrome, which was built over a field of spinach as part of a WPA project in 1936. It was the fourth bicycle racing facility built since the late 1960s. 1800 in San Jose, where it was a huge spectator sport, according to research done by Tracy Ann Delphia of San Jose State University, it was an eighth-mile track made of planks of pine with grandstands for the public, and admission was 25 cents.

Shaw, a former bicycle shop owner and bicycle historian, brought a copy of the schedule for the first race held there on May 3, 1936, showing Garden City Wheelmen manager Dewey Maxwell as the race supervisor. A group of 17 “veterans”, including racing champion George Osen and Louis O. Normandin – whose name was associated with a different set of wheels – served as honorary referees.

Hodges, who also has a copy of the schedule for the last race, held August 26-27, 1941, also made contact with Stephen Helton, a Roseville resident in the late 90s who raced at the track. Helton couldn’t make the trip for Friday’s event, but Hodges said talking to him was like stepping back in time as he recounted the cyclists from San Jose, Los Angeles and elsewhere who rode the track at his apogee.

When the United States joined World War II, most young riders left to fight. The velodrome had been built on property owned by the San Jose School District, which had planned to build another high school on the property. The bike path was demolished in the summer of 1942, and Lincoln High opened the same year.

REBUILD MORE ARTISTICALLY: Palo Alto Art Center director Karen Kienzle is thrilled with “Restart,” the center’s first juried exhibition in more than a decade. As its name suggests, it delves into the question of how we come back and rebuild after the COVID-19 pandemic and other crises that have affected people on a personal or community level.

“This exhibition will provide an opportunity for artists from Northern California to participate in an ongoing conversation about the power of art as a tool to promote resilience, hope and renewal,” Kienzle said. .

Artists can submit works on the theme until May 6. Patricia Hickson, Curator of Contemporary Art Emily Hall Tremaine at the Wadsworth Atheneum, will be the juror and $1,000 in prizes will be awarded for selected pieces. The exhibition will run from June 25 to August 20 at the Palo Alto Art Center at 1313 Newell Road. Submission guidelines are available at www.cityofpaloalto.org by searching for “Exhibition Juried”.

GOLDEN YEARS AT HOME: As demographic trends show more people living longer, the Los Altos History Museum explores what cities are doing to become age-friendly and support intergenerational communities in a free online program March 10. J. Klein, CEO of Modern Empathy, a group that focuses on “aging in place,” and Mandy Brown, senior management analyst for the City of Hillsborough.

When it comes to living our old age, where we live and with whom is important for our well-being. In a program called “There’s No Place Like Home,” the Los Altos History Museum shares what cities are doing to become age-friendly for happy and sustainable intergenerational communities. The free program is scheduled for Thursday, March 10 from 5:30 p.m. to 7 p.m.

The 5:30 p.m. panel is part of a series of programs linked to the museum’s current exhibition, “Every Wrinkle Tells a Story: Intertwined Lives,” on view through May 8, which features black and white portraits Elderly White in the Los Altos Community by artist Maud Daujean. Go to www.losaltoshistory.org to register for the program.